I had the clever idea of adding a menu option and putting my ongoing work with the the family tree there.

WordPress no longer supports ftp uploads (no surprise there), so i just added a menu option at the top (next to About) and put a link on that page:
https://www.macfamilytree.com/snowzone/Summerfelt-Hiltz/languages/en/index.html

that will take you to the page hosted on the Mac Family Tree site.

i know i shouldn’t. but i have favourite people.

it’s people at work. you read that right too.

there are people at work that i talk to the most. some for longer than 10 years, some for less. some of them know who they are. at least three of them have read this blog.

these people are fun to talk to. i go out of my way to talk to them. if i’m having a bad day (which thankfully doesn’t happen all that often), i can actually tell them, and rather than sympathy, i get encouragement. anywhere from “you got this” to “tell them to go eff themselves”. i rarely do the latter, but i usually triumph over adversity with the former.

so you people know who you are. just want to say thanks, and i hope to be able to return the favour.

you break the knuckles of someone who has the authority to sign off on a particular tech or change in tech software. that way a stoopid decision can’t be made official and actually make it out to consumers.

mac osx is a perfect example of (and possibly near the top of the list) of stoopid decisions being made for the os and then actually implementing them, thus reducing the functionality of the os.

i’ve been subscribing to the internet only version of SiriusXM for a few years now, and the mobile  app has always had issues, but the other day there was an update to the app, taking away a major feature and making the app almost useless to use (i’m referring to the MYSXM feature).

on top of that the new version of the app features options for their new video content. you read that right, video content for an internet/satellite radio.

oh, and for the record i heard “Laurel” at the same time my wife heard “Yanni”. that was one of the freakier things that have happened to me.

over the weekend, the Fitbit Versa easily became the best smartwatch on the market.

why?  an os update gave android users the ability to reply with customized canned messages. And for what i was using the Pebble Time for, the Versa is now it’s equal.

i don’t think the capability will work on the Apple watch, but that’s ok, i think they can still send their heartbeat to other Apple watch users. <snrk>

i’ll get back to the T.REX entries next time.

When i was 10 years old, I read a book called “Revolt on Alpha C” by SF great Robert Silverberg. It was a Scholastic Book Services book, but it was in our Grade 5 “library”. It had a cartoonish space ship and and astronaut on the cover, so that could have been the initial draw for me. I was living in Nova Scotia at the time.

The only books i owned at that time were; “Harry the Dirty Dog” a book my grade 1 teacher had given me as a going away gift when she found i was moving from Brunssum, Holland, back to Canada (i.e. Greenwood, Nova Scotia). I still have the book. And from some current observation, it’s probably the perfect reading speed for a millennial.

Another book i had was “The Invaders: Dam of Death” by Jack Pearl. It was one of those Whitman young adult novels, that i didn’t read till almost seven years later. I also had the Whitman book “Star Trek: Mission to Horatio”, which i did read but gave away.

After living in Greenwood for 4 years, we moved to Shilo, Manitoba. I also spent 4 years there, from age 11 to 15. So, my formative years. i’ll have a few blogs about that later. but a lot of my experiences in Shilo, are the basis for the human i am today. for better or for worse 🙂

when i was 12 my parents were going through pocket books they no longer wanted and were going to give away. i don’t know, maybe i was miffed the they were throwing something out without asking me if i wanted it first. when i asked the response was along the lines of “why? you don’t read”. ok touche. my dad had a book shelf with about 800 books ranging from UFO’s, westerns, science-fiction, and horror.

most of the books he was getting rid of were science-fiction. i was told i could have whatever books i wanted to read from box.

Not counting the books i mentioned above, the first six books that started off my book collection, were; “Death On A Warm Wind” by Douglas Warner, “The Currents of Space” by Isaac Asimov, “Shock II” by Richard Matheson, “Red Planet” by Robert A. Heinlein, “The Animal People” by Stanton A. Coblentz, and “Night of the Saucers” by Eando Binder. i’ll blog about my book collecting at a later date.

Amongst my friends i was the sf guy, and i was given a number of books by them when they had read them but had no interest in keeping them.

One of them gave me a copy of “Earth Abides” by George R. Steward. Different editions pictured below: 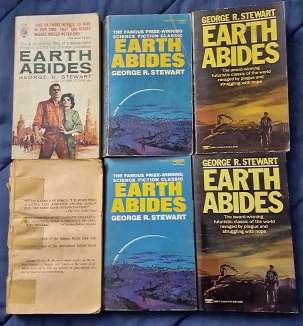 The one he gave me is the taped up one on the bottom left, but the cover was the same as the blue ones in the middle.

back then, i used to get ready for bed around 7pm, sit up and read for 2 hours before turning out the lights at 9pm. i stayed up much later on weekends but for school nights that, time was safer 🙂

i read the book over 3 nights, keeping the above schedule in mind. my first thought when i finished was “wow, that was a good book” i remembered writing in my journal at the time (yeah, gonna blog about that later also). that i was thinking of collecting books with a similar theme.

the “theme” was: post-apocalyptic. Earth Abides is about the main character’s survival after a plague decimates most of the population. There is no gruesome descriptions of people with the plague, it just is. at the start of the book while the main character is up in the mountains camping, he gets bitten by a snake, is sick for a few days in a cabin, but comes back into a nearby town to find the world as we know it is over. the rest of the story is about what he does and other survivors he meets, etc.

It was written in 1949, and with the exceptions of some social attitudes, and the lack of modern technology (i.e. that’s no cell phones for you millennials, and no TV either, not that either would have worked given he circumstances anyway), you could not tell when it was written.

I’m actually working on a very long review of the book but i don’t know if that will be a blog or not.

Earth Abides is the best book i’ve ever read. i’ve only read it 4 times (once as an audio book), but i’m due for another read. it had a significant impact on me as a kid. there is a scene at the end of the black and white movie “Fahrenheiht 451” where several people are walking in the woods reading books out loud in an effort to memorize them. and i often though that Earth Abides would be my book to memorize if it came to it.

I have since collected hundreds of post-apocalypse novels, and i keep a list of same as i run into them. The ones that stuck with me are; “Dark December” by Alfred Coppel, “Dark Advent” by Brian Hodges, “Summer of the Apocalypse” by James Van Pelt, and Stephen King’s “The Stand”

What makes Earth Abides stand out from them is it’s relatively optimistic outlook. It has what i came to know as a bittersweet ending. completely satisfying, but bittersweet nonetheless. I often think about the book. most of my friends who know i’m an avid reader know this book is my favourite to the point of obsession 🙂

i guess i went on enough about the book that the friend who gave it to me wanted to read it. so i lent it to him. in three days, it come back with no cover and in three sections (hence the tape you see in the photo above). in 3 days. apparently he’d left it out over night in a school yard, and it had rained one of those nights.

i no longer lend out books.

obviously i picked up a new copy. the top of the middle blue ones in the photo i found at a second hand book store. the bottom one is brand new and for a long time was sealed in plastic. the ones are the right side are new editions, the top one second hand, and the bottom one new. i also have two hardcover book club editions. and i will order an original hardcover at some point. every time i see a copy second hand i buy it. i have given away copies 🙂

the edition on the top left is an original version of the 1954 publication. nice cover, but anyone familiar with the story will know what’s wrong with it immediately.

i have been thinking of re-reading it the last few weeks. i thought this blog entry would hold off the craving, but i think i’m going to have to read it again soon.