So my blogging cohorts (i’m looking at *YOU*   JulieOnwards decided to up the and ante increase the blogs we had to write a month to 3, AND we have to include an image in one of them.  And  Darcie  agreed.

A long time ago a friend of mine told me I would probably like a group called “T.REX”.  At the time my three favourite groups (no hating) where KISS, Black Sabbath, and ABBA. In that order.

I had as much interest in listening to music outside of my comfort zone as having a complete collection of disco albums (although disco as it’s known today didn’t exist then). Oh, i will rant about disco later. don’t worry.

So I didn’t think about it again for about 2 years. And then a disco version of “Bang  A Gong” (a T.REX song) by a group called Witch Queen played on one of our local radio stations. It sounded vaguely familiar and it wasn’t long after that i heard the real version by T.REX. I remembered my friend had mentioned this group so i thought i would pick up the album it was on. second hand of course, i wasn’t about to put out full price for an album i wasn’t sure of. i didn’t take any musical chances back then. but i did want to check out the group.

I used to frequent a store called “Used Grooves’ that sold second hand vinyl albums. Every saturday i would go through every single record bin they had. Every saturday for a couple of years. A lot of the albums that i saw on a regular were Led Zeppelin’s first three albums, Babe Ruth’s first three albums, Fleetwood Mac albums,  Thor’s “Keep the Dogs Away”, and T.REX’s “Electric Warrior”. 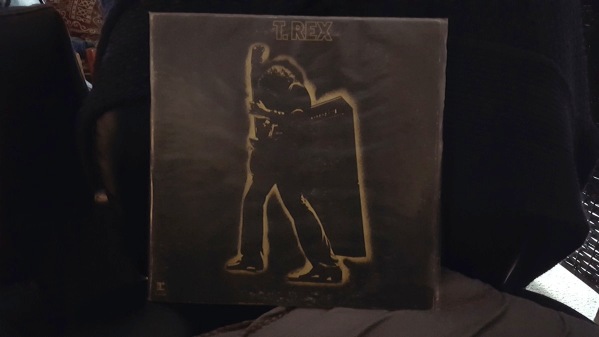 I was pretty sure they’d have a copy of it for something like $1.95 CAN. I went down to the store, went to the “T” section…and it wasn’t there. In retrospect i can see this was foreshadowing. T.REX albums were notoriously hard to find in Canada.

They had a “remaindered” bin in the centre of the small store. albums that didn’t sell or hung around too long. as a last resort i checked in the “T” section. and there it was. i got it for $0.50. Image above is the that album (i put a plastic sleeve on it a few years after).

Back then i used to listen to every album i just bought on headphones. very rarely did i not use headphones. The reason is, my first experience with headphones was listening to Pink Floyd’s “Dark Side of the Moon”. So yeah, i was spoiled for headphones early on 🙂

The very first song on the first side of the album (vinyl, remember) is a song called “Mambo Sun”.

right then and there, my favourite group was T.REX. sure I bought the album for “Bang A Gong” but that first song did it for me. i was hooked. and i had it bad. yes, the song i bought it for was good…but that first song. my EEG’s would have been off the chart. my spine tingled. it would influence my musical choices from then till now.

i would be very surprised if i’ve played that album less than a thousand times. i probably played it 5 or 6 times that first night. i know every note on it. last year on Record Store Day i bought a die cut cover version of it. I listen to the album probably once a month.